When I was eight years old, I had one of the most formative typographic experiences of my life. I would only have five more like it: three, six, 22, 25, and now 28 years later (in other words, just after midnight tonight). Of course I’m referring to my first glimpse of the opening titles of Star Wars, way back in 1977. Not having seen a lot of old Flash Gordon serials, I had never seen a movie start off like this.

Star Wars title Crawl font #1. Jan 22, 2020 at 18:07. Hello, I have searched a long time on different forum and in Dafont's forum but, nothing help me. The font used for Star Wars: The Force Awakens logo is ITC Serif Gothic Heavy, which is a display serif font designed by Antonio DiSpigna & Herb Lubalin and published by ITC. StarWordz crawl generator content is licensed under the Creative Commons Attribution-Noncommercial-Share Alike 3.0 Unported License except that which is quoted from elsewhere or attributed to others. In short, you may reproduce, reblog, and modify my content for non-commercial purposes, but you must provide proper attribution and share it under.

Everyone (okay, every Star Wars fan) remembers the seemingly endless opening shot, in which a very small spaceship is chased by a very big spaceship. And everyone (okay, every Star Wars fanatic) knows that those two ships were Princess Leia’s Rebel Blockade Runner and Darth Vader’s Imperial Star Destroyer. But before those ships ever showed up on screen, I knew something was different about this movie.

There were no names of actors, producers or even the director — no credits of any kind. All I saw were these motionless yet evocative words in blue Trade Gothic (since changed to Franklin Gothic — see below), then a very cool logo (designed by Suzy Rice of Seiniger Advertising) flying away from the camera, and finally a monumental opening crawl that set up the story and stretched into deep space. Cool.

I often cringe when George Lucas goes back and makes a change to the old movies (Han shot first!), but some changes do make sense. The movie I saw in 1977 was just called Star Wars. Now that it’s a part of a larger story, it’s called Star Wars Episode IV: A New Hope and its opening crawl was updated to reflect that change. So why not fix the horrendous word spacing? I guess in the Star Wars universe it’s not just the Force that lasts forever.

Update — Jan 12, 2014: Peter Mayhew, who played Chewbacca in the films, recently posted a photo of the crawl in production: 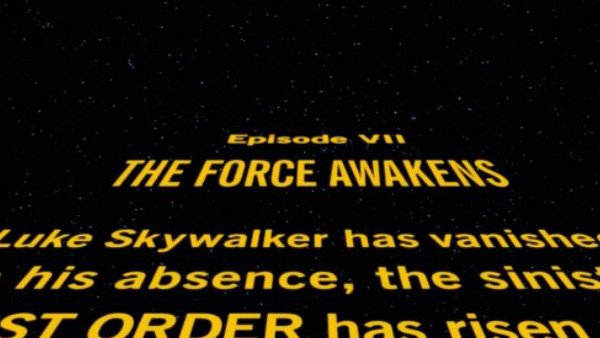 I tried to emulate the original tagline as well as I could using the ITC Serif Regular font, with -75 negative tracking for that typical 70s ‘tight but not touching’ look. I applied -125 negative kerning to neatly tuck the elipsis underneath the arm of the ‘y’, and added +35 to the right side of the ‘t’ to detach it from the ‘i’. Yet this could only get me so far. Several characters are different – the Elsner+Flake family is the only one to have the correct ‘t’ with a tail, but no digital version features the double-storey ‘a’, the ‘e’ with slanted crossbar, nor the ‘f’ with elongated tail. Because most ITC fonts from that era were display faces, they were decked out with numerous alternate glyphs for maximum versatility. This allowed designers to fine-tune the lock-up until it was just right. Sadly almost none of those extras made it to digital. It is about time someone revisited ITC’s advertising classics and restored them to their original glory.

As for the movie itself – don’t spoil it for me! – I cannot wait to watch it to see if there are any other typographic treasures to be discovered. The poster itself will definitely be discussed in the January 2016 edition of ScreenFonts.

For more Star Wars-related typographic goodness, read about the history of Suzy Rice’s original Star Wars logo design on Episode Nothing, and about the little-known pre-release version by Joe Johnston on Fonts In Use. And if just like me you are intrigued by typography in science fiction movies, go over to Typeset In The Future,Dave Addey’s excellent blog dedicated to fonts in sci-fi.

Star Wars fans are a passionate bunch, and you are guaranteed to always find a bigger geek than yourself. This article was updated and corrected on December 20, with contributions by Ness Steadman, Richard Palermo, and Stephen Coles._

Subscribe to our newsletter to receive amazing offers, useful type tips and information about the latest font releases.